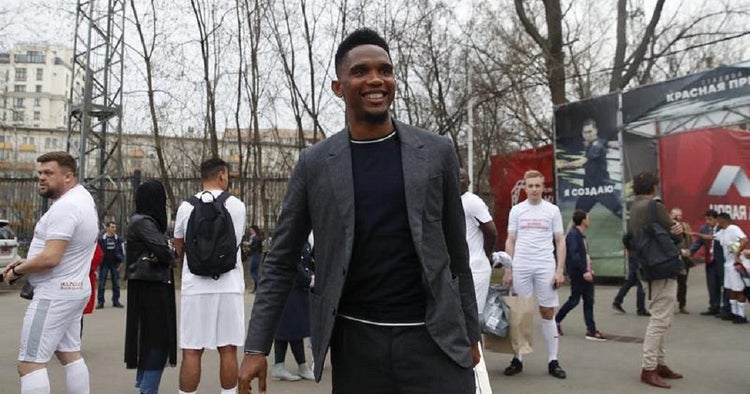 Cameroon’s football legend Samuel Eto’o has ruled out the possibility of joining politics, saying he would prefer exploring options in coaching.

38-year-old Eto’o retired in September, having won prestigious honours including the UEFA Champions League and Africa Cup of Nations, in addition to several individual accolades.

In this article, we share highlights of his exclusive interview with AFP.

No politics ‘for the moment’

Eto’o is considered one of Africa’s greats, along with Liberia’s president George Weah. The former says he does not have immediate plans to follow Weah into politics.

“Everyone wants me to go into politics, but there won’t be 10 million Weahs,” Eto’o said.

Weah, the only African player to win the Ballon d’Or, became president of Liberia in January 2018.

“Everyone is born with their own star. Everyone at some point gets involved in politics at their own level, but, for the moment, it doesn’t interest me.”

Eto’o backed president Paul, who has ruled the country for 37 years, before his re-election in 2018.

Of his supposed political ambitions, Eto’o added: “A lot of people might be saying that it’s an idea I have, but I say to them it doesn’t exist in my mind at the moment.

“But every citizen has the right. If you want to stand, nobody is going to stop you. But in our country it is as though it is something reserved for certain people. Personally it is not an objective.”

The question of Ballon d’Or

In over 20 years of playing football, Eto’o won 18 major trophies, including two Champions Leagues with Barcelona and another with Inter Milan. He also won the Africa Cup of Nations twice with Cameroon as well as Olympic gold in 2000.

He however did not win the Ballon d’Or but insists that this has not hanged his belief and pride in his accomplishments.

“I don’t need to lay claim to anything, it’s just a fact. Whether you accept it or not, it’s a fact,” he said, as frank and outspoken as ever.

“When I look at where I came from and how far I got, I tell myself that I am entitled to be proud. That doesn’t mean I am big-headed, far from it. It is just that, in this world, people like puppets and I don’t accept being one.”

Highlights of my career

Eto’o also turned out for the likes of Real Madrid and Chelsea, but for all he won in the game, it is his first major title with his country that sticks out when asked for his fondest memory.

“I would say my first Africa Cup of Nations (in 2000), because it was my first AFCON, an unforgettable moment, and I had come away from the 1998 World Cup in France with the hope of making history,” he said.

“I wasn’t a starter in that magnificent team but in the end I worked my way into the side and contributed. It is a beautiful memory.”

Eto’o also went to four World Cups but never got beyond the group stage with the Indomitable Lions.

“I told myself that, eventually, with all the magnificent players I played alongside for Cameroon, we could have won the World Cup,” he said.

“It wasn’t to be. That is the only trophy I didn’t manage to win but I had some unforgettable moments with that team.”

Part of a golden generation that featured Rigobert Song, the late Marc-Vivien Foe and Geremi, Eto’o believes he has left a legacy by helping bring through the next generation. Ajax goalkeeper Andre Onana is one player to have emerged from the Eto’o Foundation.

On his current CAF role

The two-time Africa Cup of Nations winner says he wants to move into coaching, although he has also taken a role with the Confederation of African Football.

“My role is to lobby the different federations to convince them to adhere to the work being done by president (Ahmad) Ahmad,” he said.

Eto’o and Ivorian legend Didier Drogba were in July appointed special advisors to the CAF president.

Eto’o says its only a matter of time before he returns to football in a more hands-on role.

“I know my next challenge will be to win at least as much as a coach as I did as a player,” he said.

“I would like to coach in Europe, and then one day return to Africa and win there. I don’t know how to lose.

“I am lucky to have made history at different clubs. I have a lot more doors open to me than others, but you need to be prepared.

“I want to learn, have all the qualifications, understand how things work either in my own businesses or in my future career, in order to come back in 12 or 24 months and start a new career, which I hope will be just as beautiful.”

But having won the Champions League playing for both Pep Guardiola and Jose Mourinho, whose style is he more likely to be replicate?

“I am a fan of Guardiola. I love football and I think it’s important to win in style.

“Football is like going to the theatre: it is great to go to the stadium and see a spectacle. When you watch Guardiola’s teams play, you never get bored.”

How to Design an Online Banner for Advertising.

3 Reasons to Consider TOP for Any Press Release Project.

The Use of Demographics and Psychographics in Digital Marketing.

Finding Someone To Handle Press Release.

You Need TOP Online Reputation Building Today For These 3 Reasons.

How To Get Fast Google Reviews Online.

2 Main Reasons To Opt With TOP For Online Reputation Repair.

Why All Advertisers Should Consider TOP Platform.